At some point at the beginning of the year, after much hesitation, I bought a Moonlander MK1 keyboard. I had expected some advantages from it, but unfortunately I also saw a decisive disadvantage…

This circumstance weighs particularly heavily because I use the same keyboard for my private and my work computer. But since I'm basically removing bugs from legacy software there, on many days I don't write 10 lines of new code, the risk seemed justifiable to me.

A huge advantage is, that the keyboard is completely user-programmable, in several levels and distinguishable in short, long, double and held keys.

I thought to myself, if I'm going to start typing from scratch anyway, then I'll save myself the tiresome QWERTZ layout, which again only exists in this form so that the typebar on mechanical typewriters doesn't get stuck as much as possible.

For today's writing on the PC, there are clearly more suitable layouts that relax the hands better. Dvorak, Colemak, or Neo for example. I chose the latter because it is optimized for the German language and I find it easy to remember to have all the vowels under the fingers of the left hand at rest.

And so I essentially oriented myself to Neo 2 when it came to assignment.

The labeling of the keys reads in such a way that the upper half shows what the keyboard outputs when I press the key, the lower half shows what happens when the key is held briefly (200 ms, configurable). happened. For example, if I hold down the "c" key, it becomes Ctrl-C.

As you can see, I haven't made a lot of changes to the normal Neo layout. The changes are:

Normally all special characters are well distributed here on both hands. But my mind just couldn't manage to remember their arrangement, so I came up with a completely new arrangement for this layer, which aligns with my personal writing habits and, appropriately, also provides very simple mnemonics. 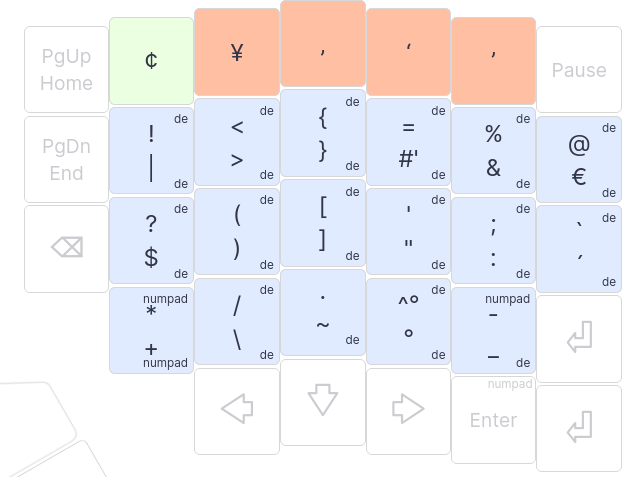 The left half of the keyboard is practically unoccupied on layer 1. Only the keys F21-F24 can be found here, where F1-F4 can be found on level 0. Otherwise, I use the keys for blocks of text that I use a lot for work, so I didn't show them here. Instead, everything takes place under the right hand.

Here you will find the PgUp and PgDn keys, which, when held briefly, not only move the cursor one page up or down, but right to the very beginning or end of the text. In addition, my hand goes a little bit out of the resting position because of the distance.

The stupid upper row is only occupied with very rarely used currency and accent symbols.

Index and middle fingers are busy with brackets. In the rest position with the normal and square brackets, which I often need as a programmer. If I stretch my fingers upwards, then with the pointed and curly brackets. With all clamps, I open the clamp by pressing it and close it again by holding it briefly. However, I very rarely have to stop because I have set my editor so that when I open a bracket, I always get the closing bracket automatically inserted.

The mnemonics came about by chance:

They also form a nice square

To the right is another square that I need for work because I write a lot of Oracle SQL queries.

It includes the single quotes to delimit strings, the semicolon to end statements, the percent sign for wildcards, and the equals sign for many comparisons.

If I move the two strongest fingers down, there are all the characters I need on the command line to enter paths ( ~ / . ) nice and easy to reach.

The less frequently used characters are nicely scattered in the remaining gaps. 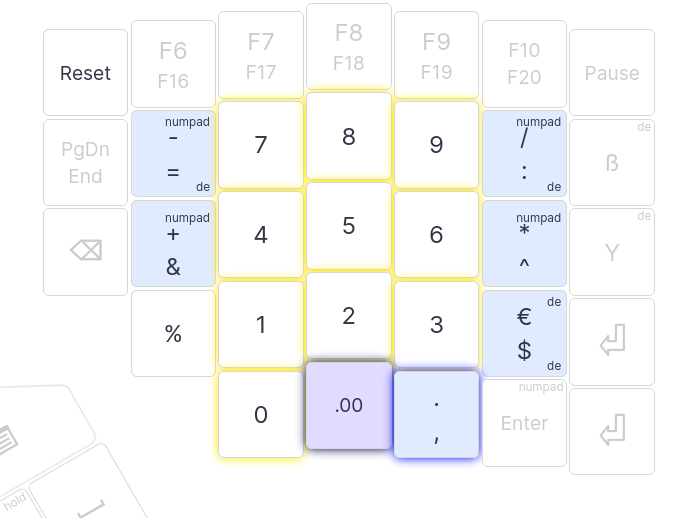 Level 2 is then reserved for the block of ten. For me, this is simply the more intuitive way of capturing digits, and as a separate layer it is not even necessary to move your right hand to the side. The left thumb changes to the level and immediately the 5 is under my right middle finger and all the important arithmetic symbols are arranged around it. Point calculation on the right, dash calculation on the left.

The layout as it is today has now proven itself very well, and as far as touch typing is concerned, I now write largely blindly at almost the old 6-finger speed that I was used to in 40 years. However, over the last 2 weeks I have noticed several times how muscle memory is taking over more and more control. My fingers now type frequently used sequences of letters independently, even before my head can break them down into individual letters. There will definitely be a lot going on in the next year.

The feared effect that I'd forget the standard QWERTZ layout didn't materialize. I always have to get used to it for 1-2 minutes, but then everything is back. I can't write blindly in QWERTZ anyway and don't want to get used to it there. But I'm still fast enough to write this blog entry in QWERTZ, for example, because it was created on my old laptop while I was out and about.

The keyboards feel so distinctly different (partly because I increased the standard incline from just under 20° with the help of a Thingiverse wedge to just under 30° inclination) that my head switches automatically.

All in all, I'm now amazed at how easy touch typing is when the environment is right for it, and why a system is still being taught and popular that's optimized for devices that it's now only can still be found at flea markets at bargain prices.