Twice a week I compile a shopping list, mostly for our local supermarket, but also for some smaller stores. Getting the finished list the easiest way to my phone was a thing that I wanted to automate for a long time.

The normal way to communicate between my mobile phone and the computer is via Nextcloud. I run an instance of it on a server, and use it for syncing my contacts, calendars, images and notes. I used those notes mostly for writing thoughts or remebering things that I needed later. But I never thought of "sending" notes to myself.

But I found that to be the best way to get me "information at the fingertip" right when I need them. So I decided to send me the shoppinglist right before I go shopping. A usual shopping list for 3 recipes looks like this

For better readability I already did something, that I do when I'm still at home. I delete all the rows of things that I have already at home, like salt, pepper, milk, flour, etc. Whenever I run out of it I put it on that list immediatly. How I get to these list will be the scope of another article in the future.

To get my list to the phone I decided to just mark the region of the file that I want to send it to my phone and press a button that is bound to an elisp script. The script reads:

As soon as nextcloud recognises, that a file in the 'cloud' folder has changed it synchronizes it to all devices including my mobile phone, and voila: 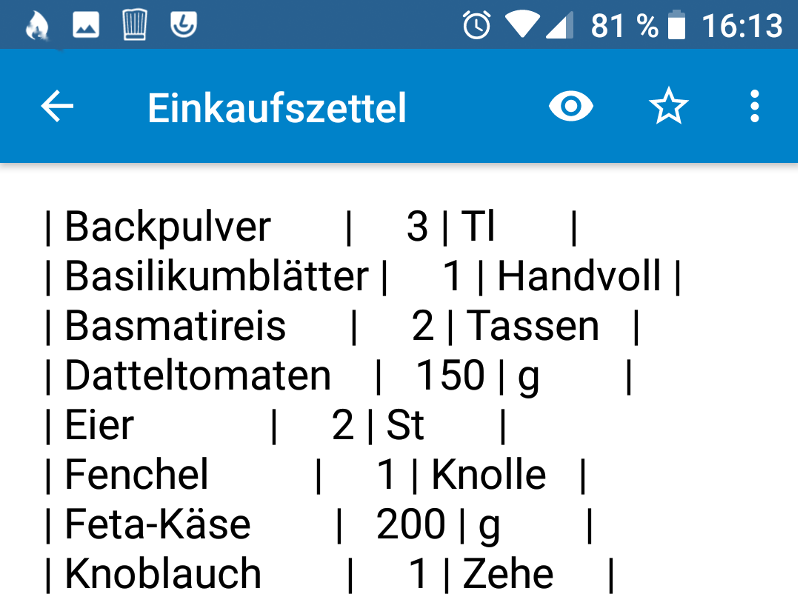 I like it, when I see the intentions of a code author, and i like to see it written down in remark lines. Why didn't someone do that with the world. It would be far easier to understand. So I started to document my world wherever I see the need to do so. In text. With Emacs Org mode. I want to share this world with you.